For Healthcare Professionals only. Prescribing information can be found both at the top and bottom of this page.

"Virchow’s Triad” is a term for three broad categories of risk factors that predispose to thrombosis. Although named after Virchow, a German doctor and early pioneer of thrombosis research in the 1850’s, what is now known as Virchow’s triad was not described until around 100 years later. The factors are abnormalities in the vessel wall, reduced blood flow, and an increase in the coagulability of the blood. A contemporary view of the triad considers the following factors: inflammation, endothelial dysfunction, and atherosclerosis (i.e. abnormal vessel wall); abnormalities of flow, for example turbulence at bifurcations and stenotic regions (i.e. abnormal blood flow); and abnormalities in platelet function, coagulation, fibrinolysis, and metabolic or hormonal factors (i.e. abnormal blood constituents). Today, endothelial dysfunction is regarded as the most important component of the triad [19]. 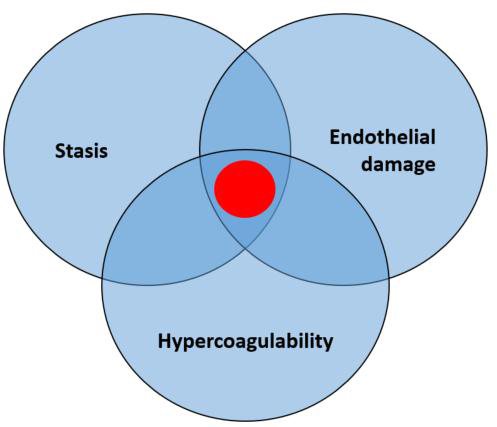 Venous stasis can occur as a result of factors that slow or obstructs the flow of venous blood, for example bed rest. This results in an increase in viscosity and the formation of microthrombi, which are not washed away by fluid movement (number 1 in the figure); the thrombus that forms may then grow and propagate (number 2 in the figure) causing a DVT. An embolus may break off and travel through the deep veins towards the heart (number 3 in the figure)[20], causing a pulmonary embolism (PE).

Endothelial (intimal) damage in the blood vessel may be intrinsic or secondary to external trauma. It may result from accidental injury or surgical insult. A hypercoagulable state may occur for a variety of reasons, for example because of maligant disease [20]. 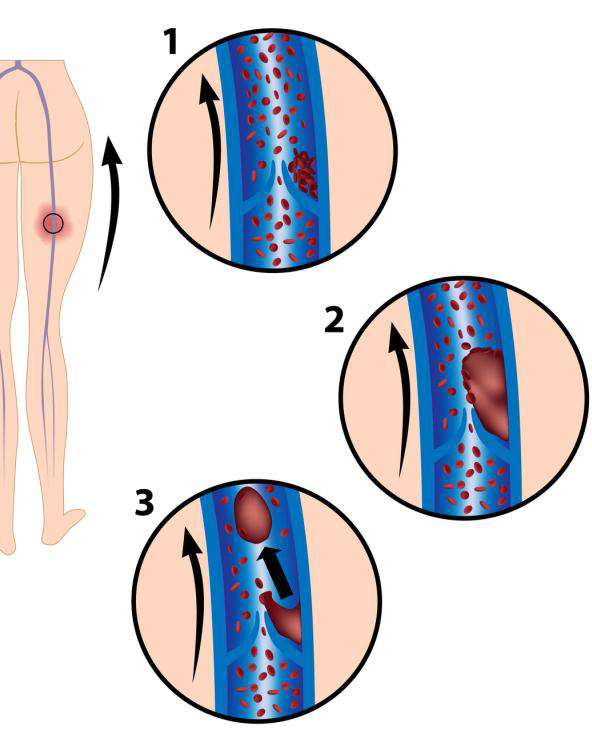 Thrombi usually form behind valve cusps or at venous branch points, most of which begin in the calf [20]. Venodilation may disrupt the endothelial cell barrier and expose the sub-endothelium, triggering coagulation. Platelets adhere to the sub-endothelial surface by means of vWF. Complexes form of the surface of platelets and increase the rate of thrombin generation and fibrin formation. Stimulated leukocytes irreversibly bind to endothelial receptors and extravasate into the vein wall by means of mural chemotaxis. Due to the fact that mature thrombus composed of platelets, leukocytes and fibrin develops, and an active thrombotic and inflammatory process occurs at the inner surface of the vein, with an active inflammatory response occuring in the wall of the vein [20].

POST-THROMBOTIC SYNDROME AS A CONSEQUENCE OF DEEP VEIN THROMBOSIS (DVT)

Post-thrombotic syndrome is usually referred to as a syndrome because the signs and symptoms usually vary from patient to patient. Patients can experience aching, heaviness, swelling, cramps, itching, or tingling in the affected limb. Symptoms can be intermittent or persistent, tend to be aggravated by standing or walking, and tend to improve with resting and leg elevation. Signs include oedema, peri-malleolar or more extensive telangiectasias, brown pigmentation and venous eczema and ulceration [21]. 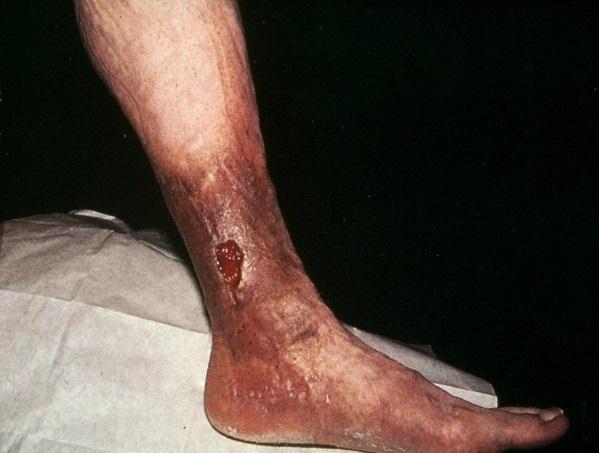 Figure: one of the symptoms of DVT is leg ulceration, which may be precipitated by minor trauma, tends to be chronic, painful, and slow to heal, and often recurs

Chronic thromboembolic pulmonary hypertension (CTPH) occurs after the failure of thrombus resolution, after the establishment of thrombosis within the elastic pulmonary arteries. The unresolved thrombotic material becomes fibrosed and occlusive vascular remodelling and secondary small vessel arteriopathy occurs. The resultant increase in pressure and vascular resistance in the pulmonary vasculature eventually leads to right heart failure [22]. Although regarded as a rare complication of PE, recent studies show that between two and four in every 100 patients with PE will suffer from CTPH within a few years of a PE [17].

Sanofi has no control over the content or availability of third-party sites or resources that are linked to, and accepts no liability or responsibility for them or for any loss or damage that may arise from your use of them. The existence of a link between this website and any third party site or resource in no way implies that Sanofi in any way approves of the content of these sites or resources, or any use to which such content maybe put.